at Mitchells Presbyterian Church And Their Restoration 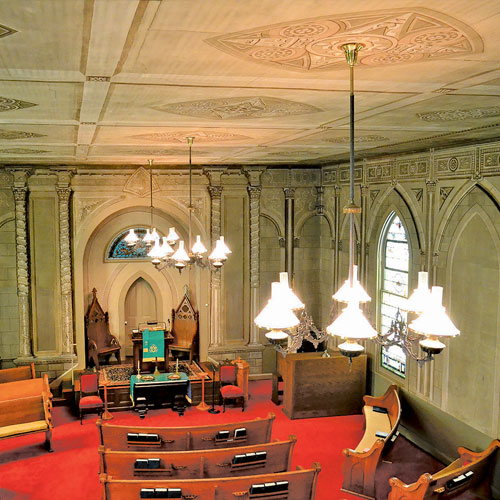 The impetus for commissioning Joseph Dominick Phillip Oddenino (1831-1913) around 1888 to paint murals at Mitchells Presbyterian Church must be attributed partly to the series of revivals prior to this. The present congregation emerged as the fruit of fervent, evangelistic preaching during the Second Great Awakening (1785-1837), a great revival movement that swept the evangelical world. In 1818 Samuel Davies Hoge and later other Presbyterian ministers began to minister in a free church with those of other denominations in Mitchells. According to the autobiography of Robert Reid Howison (1820-1906), James Somerville, Esquire, a wealthy Scottish planter at “Somervilla” in the present day Mitchells community, “yielded to the invitations of the Spirit of God,…hoped in Christ,”…and “persevered in a course so manifestly Christian and consistent that even worldly men were sometimes heard to ascribe to a miracle the change in his case.” Somerville’s obituary noted that he had abandoned a thirty year habit of over indulgence in alcohol “more visibly by the grace of God than in any other case known in this part of the world.” By about 1844 Presbyterian converts had so increased that they were organized as the Rapid Ann Presbyterian Chapel on the grounds of James Somerville’s plantation.

In 1847 the congregation underwent “a considerable revival” under John J. Royall, a follower of evangelist Charles Finney, and consequently became strong enough to build a chapel at Rivercrook on the Rapidan River. During the Civil War, congregational members witnessed “the Great Revival along the Rapidan River: in 1863 and 1864 during which 12,000 to 15,000 Confederate soldiers confessed their faith in Christ. Not surprisingly, in 1867 the chapel could be officially organized as a church by presbytery. The members relocated themselves at Mitchells and dedicated the present Gothic Revival structure in 1879. In 1888 the congregation changed its name to Mitchells Church.

The cultured sensibilities and deep Christian commitment of the wealthy descendants of the educated planter James Somerville led them to commission Oddenino to decorate the interior walls with Gothic and Classical motifs. In the 1960s Mary Lee Somerville produced a receipt showing that Oddenino was at work in the year 1888. Tradition states that Fannie and Jennie Somerville of “Somervilla” and Douglas Gray Somerville of “Stuartfield” paid for Oddenino’s work. Oddenino stayed nights at “Stuartfield” in Mitchells and sometime even slept in the church’s gallery.

Oddenino used a popular style of his day called trompe-l’oeil (deceive the eye). The eye is at first persuaded to believe that the plaster fresco paintings of Gothic arches, Renaissance styled cornices, and embellished Corinthian columns are three dimensional. The two side walls show clustered columns with ornate capitals juxtaposed with pointed Gothic arches.  The ceiling contains geometric designs and cross beams with illusionistic depth. The north wall with spiral, Corinthian columns incorporates a Classical arch to accentuate the pulpit rostrum and communion table below. Drawing from his Roman Catholic tradition in Italy, Oddenino evidently tried to deliver a typically plain Presbyterian Church from its Protestant starkness. To avoid contradicting the theology of the Reformation, he refrained from painting likenesses of Biblical saints and stayed with geometrical designs and architectural illusions.

Oddenion received preparation for his Virginia frescoes through his training in the Turin (Torino) region of the Italian Piedmont. Giuseppe Domenico Felippe Oddenino was born on August 23, 1931 and was baptized at the Church of Santa Maria della Scala in Chieri. He completed the first and second form in philosophy in 1847 and 1848 at the Turin Seminary in preparation for the Roman Catholic priesthood. While studying theology, Joseph is said to have been drafted into military service. Rather than returning to theological study after his discharge, Joseph headed his family’s linen manufacturing company where he designed patterns for fabrics. Later he offered his artistic talents to Virginia churches.

Art critiques indicate that Oddenino’s knowledge of perspective, illusion and fresco technique indicate some training in art while still in Italy. Harry Lowe of the National Museum of American Art in Washington, D.C. and Maltby Sykes, a nationally known protrait and fresco painter, believe that Oddenion’s murals at Mitchells Church are not the work of a folk artist but rather of a craftsman with some formal study of art. Though “not sophisticated,” Oddenino’s murals at Mitchells, according to Sykes and Lowe, have something better than if they were technically exact, they have an “innocence and Naivete” that are “appealing.” Oddenino used the laws of perspective for most of his murals but in some instances chose to violate them. Sykes and Lowe found the church “unusual, unique, and charming” because of its provincial qualities.” With the deepest admiration for Oddenino’s work, Henry Browne, the restoration architect, noted that Oddenino must have felt frustrated that he did not have all the skill necessary to achieve every detail of his ambitious scheme.

Richard Guy Wilson, chairman of the Architectural History Division of the University of Virginia School of Architecture, believes that Oddenino may have studied at an art academy. He states that Oddenino’s wall paintings at Mitchells “are unique, some of the very finest trompe-l’oeil paintings in the United States.” Any evaluation of Oddenino’s technique must take into consideration the fact that Oddenino was dismissed by the elders of Mitchells Church before he could complete his work. Also it appears that amateur artists have tampered with some of his unfinished paintings.

Oddenino’s life sounds like that of a stroybook character. Lured to America, he arrived in New York City in March of 1862 and began service as a musician in the Union Army in Company B, the Fifth Regiment of the New York Heavy Artillery. One of his musical compositions, “How the Gates Came Ajar,” has survived in manuscript form. The reasons for his departure from Italy are shrouded in mystery. Rumors were circulated in the Culpeper Exponent on April 22, 1887 that Oddenino was “a count, that, for some unknown cause he was banished from Italy, and that his term of exile having expired his son has come to prevail upon him to return to his native land.” An article in the Lynchburg Daily Advance on March 28, 1936 maintained that Oddenino signed his frescoes in the Culpeper County Court Room as “Count Josef OD.”  The validity of these claims to nobility has not yet been proven.

Though referred to as “well educated” by the Culpeper Exponent, Oddenino was often called the “hobo painter” by his contemporaries. In 1962 Dr. Delma Rae Carpenter wrote Miss Elizabeth Boddie Winston that he had met Oddenino during his boyhood days. He remembered Oddenino’s long full beard and heard reports about his two hundred cats. Oddenino “was good in growing grape vineyards and made excellent wine,” at his home ar Aroda, Carpenter recalled.

The “hobo painter” traveled the countryside decorating plaster and wood with his craft. His paintings at “Elmwood” near Boston, the Roy Strickler house at Banco, the Hebron Lutheran Church at Madison, the old Raleigh T. Green house at 511 North Main Strett in Culpeper, and “Stuartfield” in Mitchells still remain. Other paintings at the Culpeper Presbyterian Church, St. Stephen’s Episcopal Church in Culpeper, the Culpeper County Court Room, and the William Joseph Carpenter house near Brightwood have been covered over. The elegant frescoes at the Bowling Green Farm in Flint Hill appear also to be Oddenino’s work.

For many years the trompe-l’oeil frescoes at Mitchells Chruch failed to receive much recognition. In 1963 James Scott Rawlings first called attention to Oddenino’s work at Mitchells in his Virginia’s Colonial Churches: An Architectural Guide. In 1981 Milton L. Grigg, who had served as an architect for the restoration of Monticello and Colonial Williamsburg, developed a scheme for stabilizing the ceiling and restoring the deteriorating murals. Also the church received status as a registered landmark on both the Virginia Historic Landmarks Register and the National Register of Historic Places. Upon Mr. Grigg’s death, his associates Henry J. Browne and Margaret DeMallie of the Charlottesville architectural firm of Browne, Eichman, Dalgliesh, and Gilpin developed an effective method for the restoration of the church based upon Grigg’s preliminary plans. Besides having considerable experience supervising other projects of historic restoration, Mr. Browne occupied during the first five months of 1984 the American Chair in Preservation at the International Center for the Conservation and Restoration of Monuments in Rome where he studied under Doctors Paula and Laura Mauru, perhaps the world’s foremost authorities on fresco restoration. These authorities offered valuable suggestions for the Mitchells project.

As the restoration scheme developed, it became apparent that termite damage would require extensive structural repairs besides the restoration of the Oddenino murals. Browne assembled a team of gifted persons including Wayne Graves and Dave Clatterbuck as restoration muralists, Jameson Gibson as general contractor, Stan Scheidler as sub-contractor, and Benjamin Eubank as paint specialist.

With the formal dedication of the restoration work on October 14, 1984 at hand, and obvious parallel was discovered with the period following the completion of Oddenino’s murals. Dr. Waller Lewis Holladay, Clerk of Session, described the protracted revival services in the sanctuary with it newly decorated frescoes in the fall of 1892 when “we enjoyed a special outpouring of the Holy Spirit, reviving God’s people, reclaiming backsliders, and converting sinners.” In 1984 the present congregation prays that the physical restoration of its church will be followed by an even more glorious spiritual restoration as was the case in 1892.